These baby blankets have been really fun to make! They provide a good opportunity to practice knitting. It’s a good way to get really comfortable knitting, purling, casting on, casting off, and joining in a new skein of yarn. They’re not very challenging, but they’re fun and satisfying. Also, as a doula, there are a lot of babies. So, baby blankets it is!

My most recent endeavor is making a baby blanket for a woman I work with who is having a baby within the month. I really loved the yarn I used. It’s Loops & Threads Morocco in the color “Spiced Chai.” I originally bought four lovely skeins on sale, all from the same lot. As I neared the end of my fourth skein, I realized I would need another one. Unfortunately, two nearby stores had discontinued the yarn, which is weird, because I love the color(s). Thankfully, I found a skein out in West Valley, which was, of course, from a different lot. Oh well.

The thread was Loops & Threads Morocco in “Spiced Chai.”

For some reason, this blanket turned out a lot more uneven than the last two. The end that was cast off was really pinched and tighter than the other end where it was cast on. I also dropped two stitches (oops!), and cobbled it back together, but I ended up with two holes, the largest being a little less than a centimeter in diameter. Not very noticeable, given the loose stitches I was using, but definitely something you can see if you’re looking.

The Materials:
I used five skeins of Loops & Threads Morocco in the color “Spiced Chai.” I used size US 13 knitting needles on the round. The needles were too big for this yarn, which might be why the blanket turned out lopsided. I liked the loose look of the knit, but in hindsight, it probably would’ve been better to knit it on US 11 needles. I can’t remember what size of needles the yarn called for.

Row 12-?: I continued to knit a regular stitch for the first and last seven stitches of each row, and then I alternated knitting and purling each row until I had almost finished five skeins of yarn. The end result was about 32 inches wide and 45 inches long.

Last 7 rows: I did a regular knit stitch for the last seven rows and then cast off. 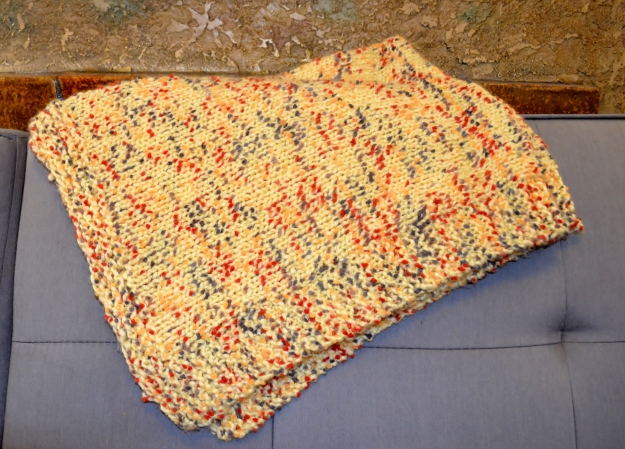 The baby blanket with border with Loops & Threads Morocco in Spiced Chai.

And another one, just because I love this wrapping paper! Here it is. All wrapped up. 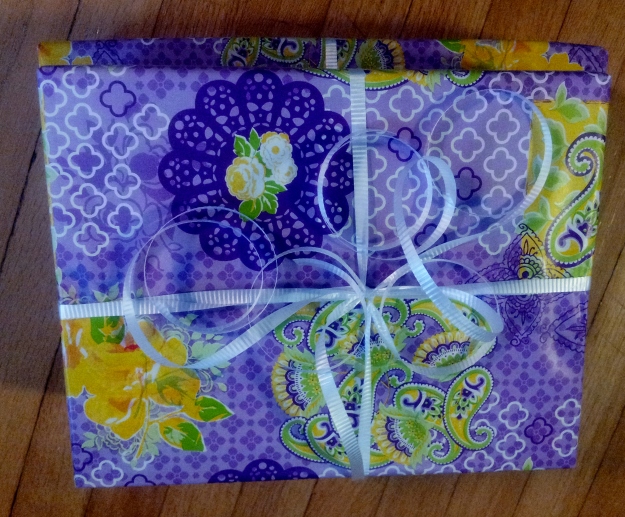 2 thoughts on “round 2: knitting a baby blanket (with pattern!)”