One of those things went around Facebook asking people to list the top ten most influential books they’ve ever read, and several writer-friends mentioned Coeur De Lion by Ariana Reines. So, I got it, and read it in a few hours late one morning (which, coupled with a cup of tea, felt amazingly indulgent, by the way). 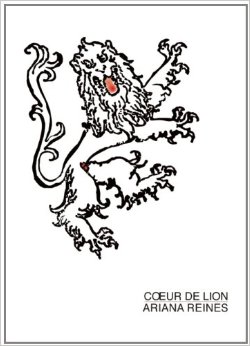 The book is erotic and smart, and gives the impression of effortlessness. Like when the untrained eye looks at a piece of abstract expressionism and says, “hey, I could do that!” In so many ways, it feels like the emotional frenzied jotting down of ideas that happens thoughtlessly in a bedside journal. But there is such an attention to sound, such perfection throughout, it is clear the effortlessness is no accident. Here, for example: “She has curly hair like me, but in this jpeg it looks like she puts more emollients in hers.” While it may sound very conversational, the sound and rhythm are just beyond.

Here are a few other lines I liked in the order that they appear:

“You wrote exultant
Emails to your girl, something
About, like, the bliss of satiating
Yourself inside her, etc.”

“She is sexually terrifying. Her elegance
And intelligence dignify the insanity so
Much I forget not to be charmed”

“It’s been so easy for you
To disengage yourself from your
Behavior, as though you really
Were conjectural, as though
Your desire really were as limitless
And general as the fucking internet.”

That last one was worth the wait, wasn’t it? Anyway, go now. Read the book.