I got to see The Revenant, directed by Alejandro González Iñárritu, over the weekend because Leonardo DiCaprio and Iñárritu. I started seeing previews for it last fall and knew immediately that I wanted to see it…because Leonardo DiCaprio and Iñárritu. I’ll watch DiCaprio do anything. He gets a hard time from my male peers because the women in their lives made them watch Titanic (which is a great film, by the way), and they targeted their anger at DiCaprio. He became their nemesis, and they’ve overlooked all his work since then. However, while DiCaprio is beautiful, his work as an actor absolutely stands the test of time.

DiCaprio does depth in The Revenant, but the role doesn’t particularly call for range or complexity. He might finally get the Oscar for this one, but it will be one of those that *are on behalf of his entire body of work* because he’s done plenty of roles that were absolutely Oscar-worthy. (From DiCaprio, you can always expect a shriek (his are singularly evocative), and they don’t make you wait for it in this film.)

The Revenant is beautiful. It’s shot only with natural light. The landscapes are breathtaking. Iñárritu frequently includes long clips of running water, scan birds flying through the sky, or unset through the black silouette of a forest–the kind of stuff I would Instagram. In that way, he has a tendency toward over romanticization and daydream and, in this case, it didn’t always fit the grittiness and realness of the film.

Here’s somewhat of a

In the film, you get a stoic man, completely competent in hunting, fire building, and surviving for months on end in high mountain blizzards. His only drive is to avenge the death of his Indian wife and children–all senselessly murdered in cold blood, of course. He eats buffalo. He contents with wolves and a grizzly. He navigates seemlessly between the friendly and the hostile Natives. He speaks several Native languages. He survives a blizzard inside the carcass of a large dead animal. He stumbles through cold mountain streams. Audiences can’t believe he’s still alive. Audiences marvel at how quickly they themselves would be dead in similar circumstances. In the beginning, the man is stripped bare, by the end it goes unimaginably further. In the end we are all wondering, what now? What was it all for?

The Revenant is relentless. Some of it’s most difficult scenes are seem to never end. Despite it’s length, the film held my attention. I wasn’t dying for it to end. I was engaged throughout. This one’s worth seeing in the theater if just for the magnificent and enormous shots of landscape.

I watched Birdman over the break, and it’s a spectacular film worth seeing, especially if you haven’t already watch Aronofky’s The Wrestler or Black Swan—all portrayals of big celebrity personalities who have lost touch, or are losing touch, with reality. While Aronofsky is probably wondering how Alejandro González Iñárritu got ahold of his script, viewers are growing weary of the possibility of seeing suicide and self-harm, as emotionally unstable characters linger closer and closer to dangerous edges. 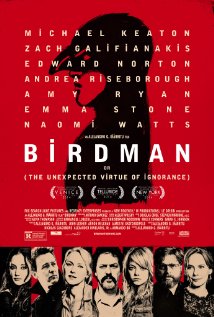 Michael Keaton is wonderful and nuanced and vulnerable, as are Edward Norton, Naomi Watts, Andrea Riseborough, and Amy Ryan. Emma Stone, who I love in over-the-top comedic and big blockbuster performances, seemed less capable of a performance en par with the work of her colleagues. It can’t be fun to be the novice among acting giants.

In part, the movie provides a delightful and smashing critique of…well, critique. And so, I am aware of the complexity of my own participation in the writing of a critique of the film. Bottom line, it was a pretty good film, with great actors, who did their best to bring new light to material and subject matter that has already been done to perfection by Darren Aronofsky.