For years I did not like crafting. It seemed like the antithesis of art, and art was what I was after. However, that’s shifted for me in recent years when suddenly things like tying knots with sticks and stitching little squares into aida cloth has seemed strangely satisfying and important. I’ve even developed a few philosophical justifications for crafting. (And I’ve been delighted that people in my own field of study have taken up the subject as well.)

Recently a colleague,  who takes crafting above and beyond anything I will ever do, stopped by my office to talk about the stuff we’re making, and I was motivated to put together this post about my last baby blanket. I made it as a gift for my cousin’s daughter. Her son got one when he was born, but I hadn’t made one for the older daughter. My homemade blankets have imperfections (which makes them unique! which isn’t something everyone values!)), so I was delighted when my cousin’s husband mentioned that their son loved his blanket and used it all the time.

Here’s the blanket that I made for my cousin’s daughter. I’ll be using this pattern again. I think it is my best baby blanket to date.

skein of Loops and Looms—Lavender Blues 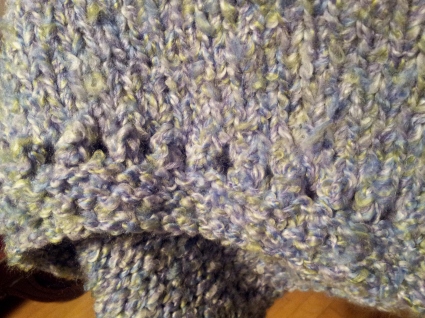 For the body of the blanket, continue to knit four (to the mark), increase, knit across (for 63), increase, then knit the last four. For the next row, knit four, then decrease, purl across, decrease again, and then knit the last four. Continue to alternate between knitting/increasing rows and purling/decreasing rows. Stitch to the desired length. I ended on knit stitch (with increases on each end before moving on to border).

At the very end, knit four, decrease/slip, increase/knit (for 63), then knit the last four stitches. That creates the last border edge. Then, knit the last five rows, and cast off.